Jeffrey Beecher is 32, and was born outside New York. The magnificent instrument he hauls on stage each week as principal double bassist of the Toronto Symphony Orchestra is approximately 10 times as old, and was born at the foot of the Italian Alps. At the time of its creation, most basses “looked like small houses,” Beecher says, but not this one. With its then-radically slim proportions, the instrument, built by the master luthier Giovanni Battista Rogeri, helped set the mould for the three centuries of basses that followed.

We don’t know who Rogeri sold it to, but we do know that by the 19th century it turned up in the possession of various European collectors before being sold for a time to Rodman Wanamaker, scion of the famed Philadelphia department-store family (he apparently staged special concerts to showcase his treasury of priceless instruments).

When Beecher learned the legendary instrument was up for sale in 2007, he flew down to Albuquerque, N.M., to snatch it up – something he was only able to accomplish after a well-connected TSO board member agreed to act as guarantor on what amounts to a very substantial bass mortgage (25-year amortization, variable rate; he’s about halfway done paying it off).

Yamaha Digital Mixers Are In The Eye Of The Storm 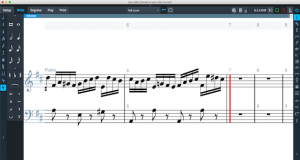