A ground-breaking when it was introduced in 1990 the KORG Wavestation has garnered something of a cult following and deservedly so. Even decades after it's release the Wavestation can still produce sounds that would be hard to create on any other synthesizer. Now we also have the KORG Wavestate, an update on the original but with more control and added features.

Great video of the new KORG Wavestate with Luke from KORG and Jack of Andertons.

Korg's own Wavestation Page is a little more bite size with a short video and sound clips for those that don't want to sit through 20+ minute videos of people talking.

It also has a good description of what Wave Sequencing 2.0 is along with audio demos (including the ubiquitous "Ski Jam" from the original wave station redone). Sounds quite interesting. However I do not like the form factor of a three octave keyboard (without aftertouch, I think), and I literally have no more space in my studio. I am still working how to fit in the ROLI hardware in that was my Christmas gift! And my AN1x is looking lonely in the corner as it has been displaced by the Prophet (I need a three tier keyboard stand so it can sit above my usual gig rig)

I did skim the linked video linked by Saul above, and really liked the movement in the pad around 4.40. Will take a more complete listen when I have time.

I would be really interested in Wave 2.0 if they also considered releasing it as a VST or as a paid upgrade to the Wave Sequencing in the Kronos HD-1 Engine.

Also relieved to see still no new Kronos replacement, as it means I still have their current workstation

Apparently the price for the wavestate is here in the UK is £699...well let's call it £700. I don't like those "99" figures they use when pricing as it makes something feel cheaper than it is in reality?

Still mulling over whether that is a good deal or not. I have the software version of the Wavestation and although I have an interest in 'wavestate' I am not sure I want to part with any cash for one. Don't like the name much either.

Think it will be one for the rather long wish list.
Saul
Site Admin
#masks4all

@Derek: I would expect that Korg will release a desktop version at a later stage which should reduce space concerns.

With regards to the price I agree it's a bit too high, I would consider about 500€ to be a fairer price for such a compact and relatively basic digital synth (sample based, no real multitimbrality except performance mode, only 64 voices).

If you think of it the only thing that sets this synth apart from any other ROMpler is the built in joystick, as otherwise it's just a ROMpler. The joystick is what enables the movement between the various samples by blending between them. But this is something that can be achieved with practically every ROMpler that allows one patch to be made of 4 waveforms, all you need is a joystick type controller that sends appropriate CCs to tweak the volumes of the single waveforms.
I though of implementing something like this about a year ago with the Korg nanoPad2 which has a X/Y pad, but so far I haven't found the time for it.

tux wrote: ↑
Wed Jan 08, 2020 6:55 am
@Derek: I would expect that Korg will release a desktop version at a later stage which should reduce space concerns.

I don't even have space for that. I need VST versions unless I sell something to make room for something else.

Wave sequencing is far, far more than that, which is what makes the original Wavestation such a revered synth, and why I want to see their new version in either Kronos HD-1 form or as a VST. The joystick is simply part of the modulation system that allows you to manually blend the oscillators.

The genesis of the Wavestation was in the Sequential Circuits Prophet VS, which had digital oscillators with sampled waveform snippets, capable of being mixed by Vector Synthesis (either the joystick or via a recording of your joystick movement), so that is possibly close to your analogy of being able to mix/blend ROMPLER Waveforms.

The Wavestation came from the same design team behind the VS. After Sequential folded, Yamaha brought them out, but didn't know what to do with them, and Korg jumped in and set them up as a Korg Design House and they really evolved the concept that became the Wavestation.


A wave sequence is a programmed list of PCM waves playing in succession. Each step in the wave sequence can have a different duration, pitch, fine tuning, level and crossfade amount. Additionally, wave sequences can be looped (forward or forward/backward directions) to play indefinitely or for a finite duration; they may also be synchronized to the Wavestation's internal clock (at a user-adjustable tempo) or to MIDI clock signals from a sequencer. The result is a continuously changing sound, producing either a smooth blend of crossfaded waves, or semi-arpeggiated and rhythmic sequences, or a combination of both. In a Patch, different wave sequences can be assigned to each of the four oscillators, thus the Wavestation is capable of generating four distinct wave sequences playing simultaneously during a single note. In Performance mode, up to thirty-two discrete wave sequences can be played at the same time by layering eight 4-voice patches, although the actual number of playable wave sequences may be less because an additional oscillator is required to execute a crossfade.

In other words, whilst you could use the Wavestation as a conventional ROMPLER and have static samples playing through the engine, a conventional ROMPLER will simply not be able to replicate the morphing wave changes that you get in Wave Sequencing, which can range from gently shimmering, evolving "New Age Patches" to dynamic and hard cutting rhythmic performances, which made the Wavestation unique until Korg reimplemented the concept in the OASYS and Kronos HD-1 engine (and with KARMA added to boot).

And Wave Sequencing 2.0 looks like you have far more control and options over how the waves are blended in a sequence, which is why I am getting the GAS for the engine and concept, but not for a three octave keyboard implementation.

With the Wavestation, each step of a Wave Sequence had a duration, a sample, and a pitch. This created ear-catching patterns–but the patterns repeated the same way, over and over. What if they could evolve in organic, unexpected ways, instead of just repeating?

Wave Sequencing 2.0 splits apart the timing, the sequence of samples, and the melody, so that each can be manipulated independently. Also added are new characteristics including shapes, gate times, and step sequencer values. Each of these is a “Lane,” and each Lane can have a different number of steps and its own start, end, and loop points.

Every time the sequence moves forward, the individual Lanes are combined to create the output. For instance, a sample may be matched with a different duration, pitch, shape, gate length, and step sequence value every time that it plays. You can modulate each Lane’s start, end, and loop points separately for every note, using velocity, LFOs, envelopes, Mod Knobs, or other controllers. Each note in a chord can be playing something different!

Lanes can also randomize the step order every time they play, with realtime control over the range of included steps. Finally, individual steps can be randomly skipped, with a modulatable probability from 0 to 100%. The result is organic, ever-changing sounds that respond to your control. The four onboard arpeggiators can interact with Wave Sequences for even more possibilities. 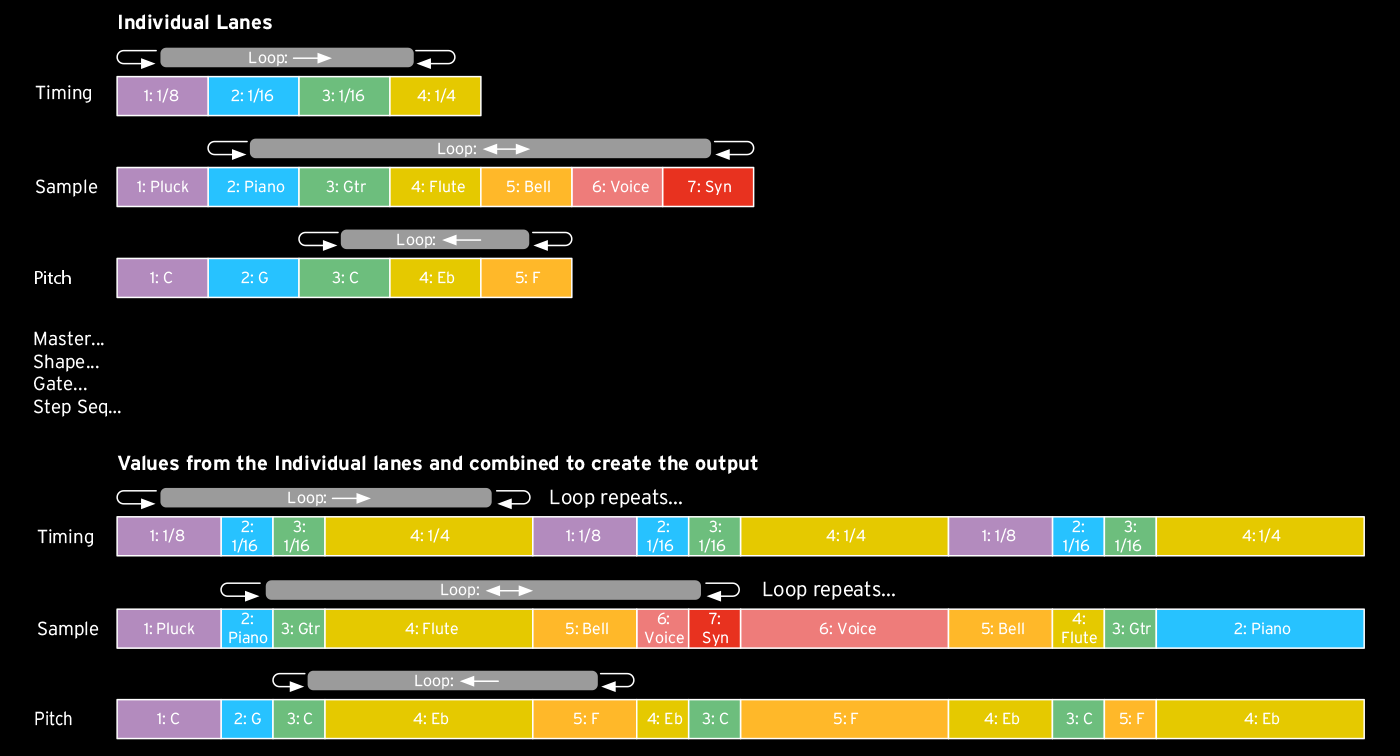 As a side note, the “Lane” concept is inspired in part by the methods of 20th-century serialist composers such as Pierre Boulez. Of course, in the wavestate you can play it polyphonically from the keyboard, controlling and modulating the Lanes (or, in 12-tone speak, "rows") and event probabilities in real-time and separately for each note, if desired...and of course the pitch Lane doesn't need to play melodies; it can just introduce subtle detuning, or occasional octaves, etc.