The Arp 2600 was one of the most revered synthesizers of its time. KORG have now recreated this classic synth and also brought it fully up to date.

As we all expected KORG have finally announced the launch of the much anticipated ARP 2600.

However here's the clincher. This is a ONE TIME only production run!

That's right folks. If you want one you need to grab it whilst you can.

Here is what KORG are saying about the ARP 2600:

The ARP 2600 is brought back to life in a single, one-time-only production run. Now is your opportunity to own one of the most sought after and coveted instruments from the vintage synthesizer era. This limited-edition release includes USB and DIN-style MIDI connections, XLR audio outputs, plus the improved ARP 3620 Duophonic Keyboard with an added arpeggiator / sequencer. Your new ARP 2600 will arrive in a custom-branded hard shell case, complete with casters.

Now does that mean they will never produce it again? I'm not convinced of that

As we know, Behringer have an ARP clone in the offing but will it be as good as the KORG and in any case who would you rather buy an ARP 2600 from?

Have to admit that although I like what KORG are doing at the moment, the ARP 2600 doesn't really inspire me at all. Seems a lot of money for some very limited sounds that most modern synths could do. There is certainly no end of software that could reproduce these sounds.

However I do see the value in recreating a classic like this. It is far more about the synth as a whole than just the sounds it creates.

Way too expensive for me of course and I would have no place to put such a thing.

If anyone has a spare $3900 floating around doing nothing and you want one of these I think you best get your name down now. Even at that price I can't see them hanging around for long!
Saul
Site Admin
Subscribe To Our YouTube Channel!
Review Yamahamusicians.com on Trustpilot
Sign up to the Newsletter
Follow us on Twitter @YamahaMusicians
Follow Us On Facebook
Follow Us On Tumblr
Dowina Acoustic Guitars: Dowina Cabernet DC
Dowina Chardonnay GAC DS - Dowina Rustica GAC - Dowina Marus - Dowina Puella
CASIO PX-S1000/Vintage VE2000GG Gordon Giltrap/Ibanez AE245/Novation ReMote 61SL/Arturia Analog Lab 3/Arturia Piano V2/Pianoteq 6 Pro/Apple iMac 27"/Logic Pro X/Ableton Live 10/Behringer QX1202USB Mixer/Presonus Eris 4.5 Active Monitors. Minelab Equinox, Golden Mask One 15 kHz.
Top

Waiting for the Behringer 2600

Surely won't be as eye-catching as Korg's, but probably half of the price (or less), while nailing the sound and functions

The Korg 2600 is more like a collector's item. Full replica with suitcase and all
Top

Yes I think the Behringer version will be the one most people end up gravitating toward, even just for the lower price.

Saul wrote: ↑
Fri Jan 10, 2020 2:56 pm
... the ARP 2600 doesn't really inspire me at all. Seems a lot of money for some very limited sounds that most modern synths could do. There is certainly no end of software that could reproduce these sounds.

I don't really agree, Saul. Unless your modern synth is freely patchable in the way the ARP 2600 is, then it cannot compete when you start patching the Korg ARP outside of the conventional VCO/VCF/VCA chain. Some synths have a lot of flexibility in their mod matrixes now, which will of course go some of the way there depending on their flexibility. Once you get into VST land and an ARP 2600 clone, then I would agree more.

Whether you need that sort of flexibility depends on the sorts of sounds you want of course.

And as we have discussed before, each analogue synth does have its own sonic character, and the ARP is as unique as others. For example, you never heard a MiniMoog sound in Genesis because Tony Banks was an ARP user. You wouldn't try and tell a guitar player that a Strat can replace a Les Paul for tone and sustain, would you?

Is it worth the price? It will be for some, but not for me. I have no space, and I think it is for true officiandos only, and I have the 2600 in Arturia V collection form, which is far more convenient. And I still have my Nord G2 Engine (fully modular synth in a 1U rack).

But Kudos to Korg for resurrecting this. Will be interesting to see how the Behinger clone will fare against it.
Regards
Derek Cook

Disappointing to see Din-Midi sidelined in most of these new offerings from Korg . . . (and possibly others?)

Maybe it's the Market it's aimed at? - but I doubt that a multiboard user would "Out" their master controller for the i3 -

no rear panels? With Midi 2.0 on the way this is not encouraging - unless of course midi 2.0 is all about USB?

Which would be short-sighted - and a great shame IMO 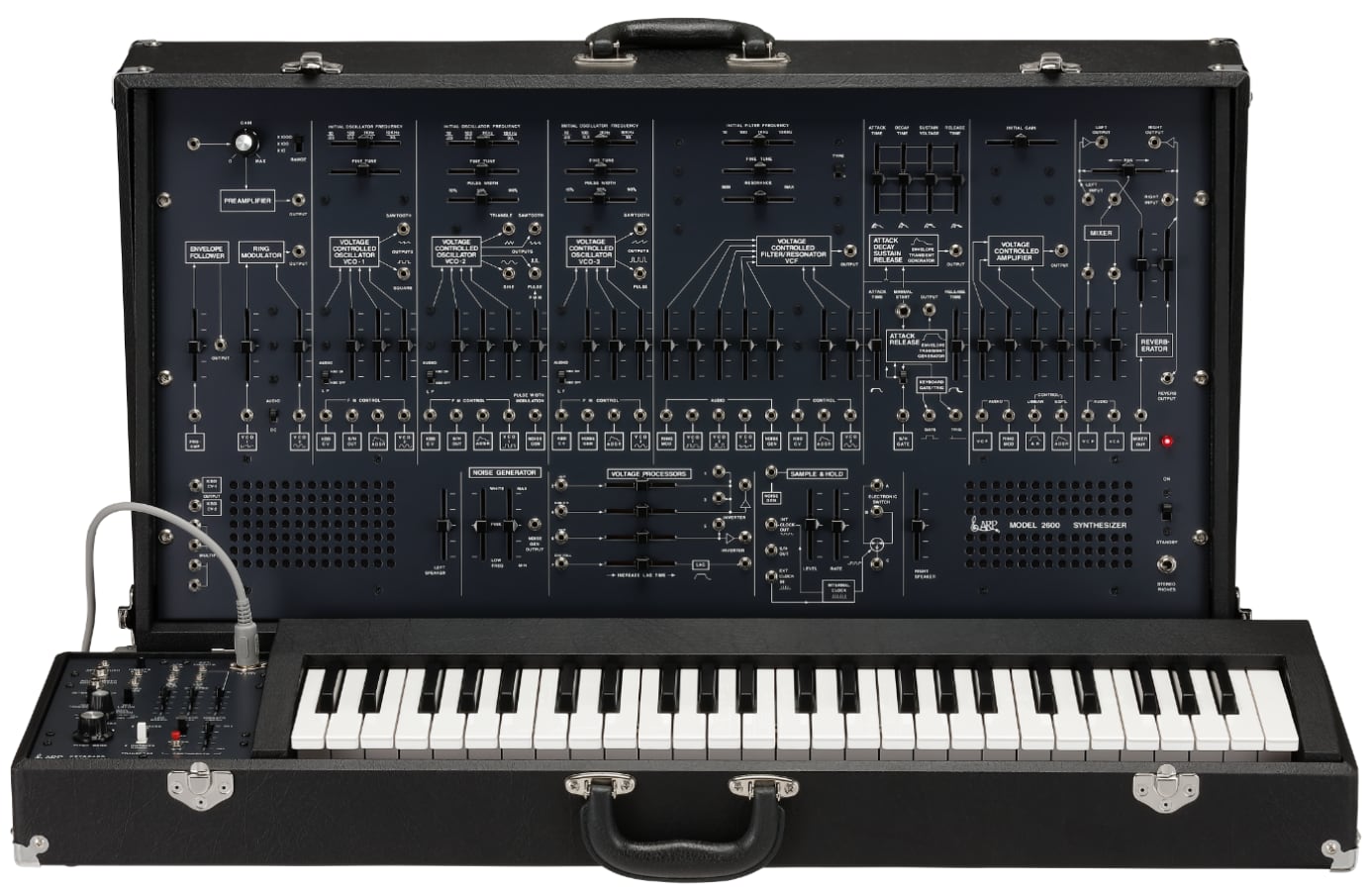 I guess I was just never that focused. I like a wide range of instruments and sounds but not because of any attached history or how iconic they are/were. I don't have any historical attachment to old keyboards...other than for the novelty factor. Being able to buy what was a top of the range keyboard for very little money, play around with it then sell it on and get something else.

I have owned over 35 keyboards, perhaps more but I have never bought a keyboard or guitar for that matter because it was played by a certain artist or used in a famous band or for a certain genre of music.

In other words what I am trying to say is the ARP 2600 doesn't "represent" anything for me. I can understand what it represents for others but it doesn't touch me at all.
Saul
Site Admin
Subscribe To Our YouTube Channel!
Review Yamahamusicians.com on Trustpilot
Sign up to the Newsletter
Follow us on Twitter @YamahaMusicians
Follow Us On Facebook
Follow Us On Tumblr
Dowina Acoustic Guitars: Dowina Cabernet DC
Dowina Chardonnay GAC DS - Dowina Rustica GAC - Dowina Marus - Dowina Puella
CASIO PX-S1000/Vintage VE2000GG Gordon Giltrap/Ibanez AE245/Novation ReMote 61SL/Arturia Analog Lab 3/Arturia Piano V2/Pianoteq 6 Pro/Apple iMac 27"/Logic Pro X/Ableton Live 10/Behringer QX1202USB Mixer/Presonus Eris 4.5 Active Monitors. Minelab Equinox, Golden Mask One 15 kHz.
Top

Saul wrote: ↑
Fri Jan 10, 2020 10:35 pm
I have never bought a keyboard or guitar for that matter because it was played by a certain artist or used in a famous band or for a certain genre of music.

Quite so, with the possible exception of the Behringer D.

I admit to being a succour for Rick's soloing tones + I'd like to learn how they are "made" - and use some in my own music. I could never afford a real MiniMoog back in the day . . . I could now, but can hardly justify the expense for what I do. The Behringer is a good compromise.

I bought my SY85 from a guy at Uni. I liked the stuff he did using it with Cubase - and I bought it purely on that basis.

I've enjoyed it, and still think it's a great board within it's capabilities . . .

Same with the Alesis Fusion. (I've not really heard of any mainstream Band using one)

I bought it based on my own research, and lurking in the Forums dedicated to it.

As soon as I played the 8HD - I was smitten by the keybed - one of the finest Weighted beds I've played - and it has AT.

Engine wise it is still only eclipsed by the Kronos. It's build quality and fully TRS INS/OUTS show that it was meant

for serious Pro use.

Virtually unlimited Bank Storage - due to the HD, MASSIVE Polyphony intelligently managed depending on Engine use

SATA HD/CDR unimplemented. Would have been nice to see OS 2.0, as well.

Keybed - also with AT.

FULL DIN-midi on both. The USB implementation serves ONLY for data transfer to/from the HD (NOT AUDIO/MIDI).

There is also S/PDif out, mirroring the Main OUTS.

Even some of the more recent "Flagships" still don't come close . . . .

I have always brought my gear based on what it will do for me after my research, not because "so and so" has one. If I were to tread the latter path, I would be bankrupt!

But I have a keen interest and ear as to how classic sounds where made and by what. As a result (and mainly in my genre of interest)I have a reasonable ear for spotting what is used based on the sound - sometimes even the preset! Certain signature presets from the EX5, Wavestation and M1 are quite obvious.

Reproducing those old sounds has of course become much easier and more accurate in recent years due to the quality of the modelling. For years I have tried to get the classic early Floyd organ sound which was a Farfisa Organ through a Binson Echorec delay. I would find I could get a reasonable sound but it never sounded like the original. That all changed last year when a Binson Echorec VST emulation appeared. Put an Arturia Farfisa V though that and it is 100% bang on.

We're living in a golden age in that context, all the classic sounds at reasonable cost and no maintenance nightmare, but then also modern recreations like this Korg. I still don't quite believe that I now own a modern version of the classic Prophet synth, which sounds gorgeous!
Regards
Derek Cook

I was just trying to think back through the ever increasing years to see if there was actually any instrument(s) that really caught my attention and the only one that comes immediately to mind is the Ovation Breadwinner that Alex Lifeson played for a while in RUSH. The main reason for that though was the design not the sound. Although of course Alex always has his own sound no matter what he plays.

I've never heard of that Ovation guitar before. You live and learn.
Regards
Derek Cook