This section is dedicated to players of electric guitar. From beginner to expert and all in between. Everyone is welcome here.

I'm a retired longtime player, and somewhat of a collector and like semi hollow models in particular wayyy over solid body and somewhat over fully hollow electrics.

Being a member on several forums I see little chatter on Yamaha semis, and even less on the 2000 series. This surprises me as the mid to upper tier of other brands get a substantial amount of traffic while the very well appointed SA2000 series seem to get very little.

Maybe that's one reason that has kept me from pulling the trigger on one for so long, as well as my affinity for natural finishes and mid to upper tier models which seem rather scarce in the SA2000 models.

So if there is a question to be asked, is there some hesitancy by players to buy into the 2000 models while the other lower tier models seem to be well represented in player's hands?

Lots of discussion here on the Sas but we always welcome more. I am a fan of all SAs my SA1200S is my favourite guitar but I would love to expand and get a another especially is I could find a 2500.
You might enjoy the SA section of my website here http://www.alston-family.co.uk/SA/indexsa.php
Welcome to the forum

Bill
Web http://www.alston-family.co.uk for lots of Yamaha and other guitar information

The SA guitars are imho are one of the most undervalued Semi hollow/335 style guitars on the market. When I was trying to get my first 335 I was eying a Gibson or Heritage but the Yamaha 2200 had nicer features for lower price and my nicest guitar I ownm I think also Ibanez is another go to for semi hollow guitars that people overlook Yamahas.

For the SA 2000, I see them starting to go for good money know but for a few hundred dollars more in comparison to other lower digit SA guitars. Still they are great for the money and even great to find deals on.

I've kept a lookout for a natural 200x for a while and recently found one in not original condition (replaced pups and frets) and I pulled the trigger on it.

NGD to follow after it arrives, that is IF it arrives safely. I've had some dismal luck in the recent past with shipping damage.

gnappi wrote: ↑Sat Nov 23, 2019 6:55 pm
Being a member on several forums I see little chatter on Yamaha semis, and even less on the 2000 series. This surprises me as the mid to upper tier of other brands get a substantial amount of traffic while the very well appointed SA2000 series seem to get very little.

Maybe that's one reason that has kept me from pulling the trigger on one for so long, as well as my affinity for natural finishes and mid to upper tier models which seem rather scarce in the SA2000 models.

So if there is a question to be asked, is there some hesitancy by players to buy into the 2000 models while the other lower tier models seem to be well represented in player's hands?

No hesitancy whatsoever, but it is hard to find SA 2000's in good shape and with original pickups. The YN version in natural is really hard to find, but after looking for a long time, one did come up for sale and I jumped on it.

I'm a 335 junkie, well I only go after Japanese 335's. SA 2000 is among the best of them and a relative bargain. Most of the Japanese brands went for very high accuracy to the early Gibson's, but when Yamaha did their refresh of the SA line in '77 they went their own way but made them look much closer to a 335 than they had previously.

If you want super accuracy to a '59 335, then early 80's Greco SA 1200 and Tokai ES-150 and ES-100 are the winners. Ignoring historical accuracy, SA 2000 is right up there with the Greco's and Tokai's. There are other really amazing Japanese semi acoustics from this time as well. 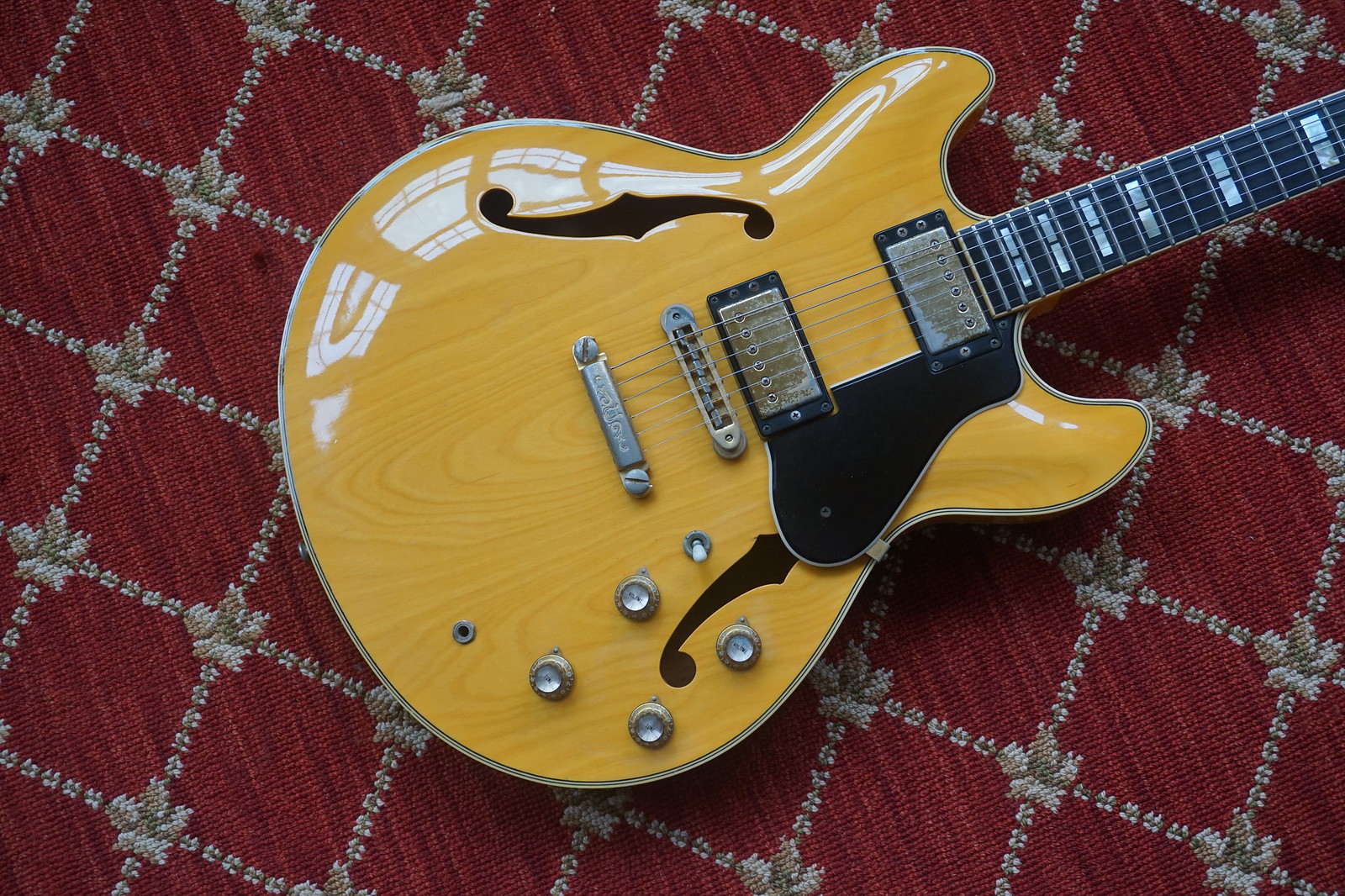 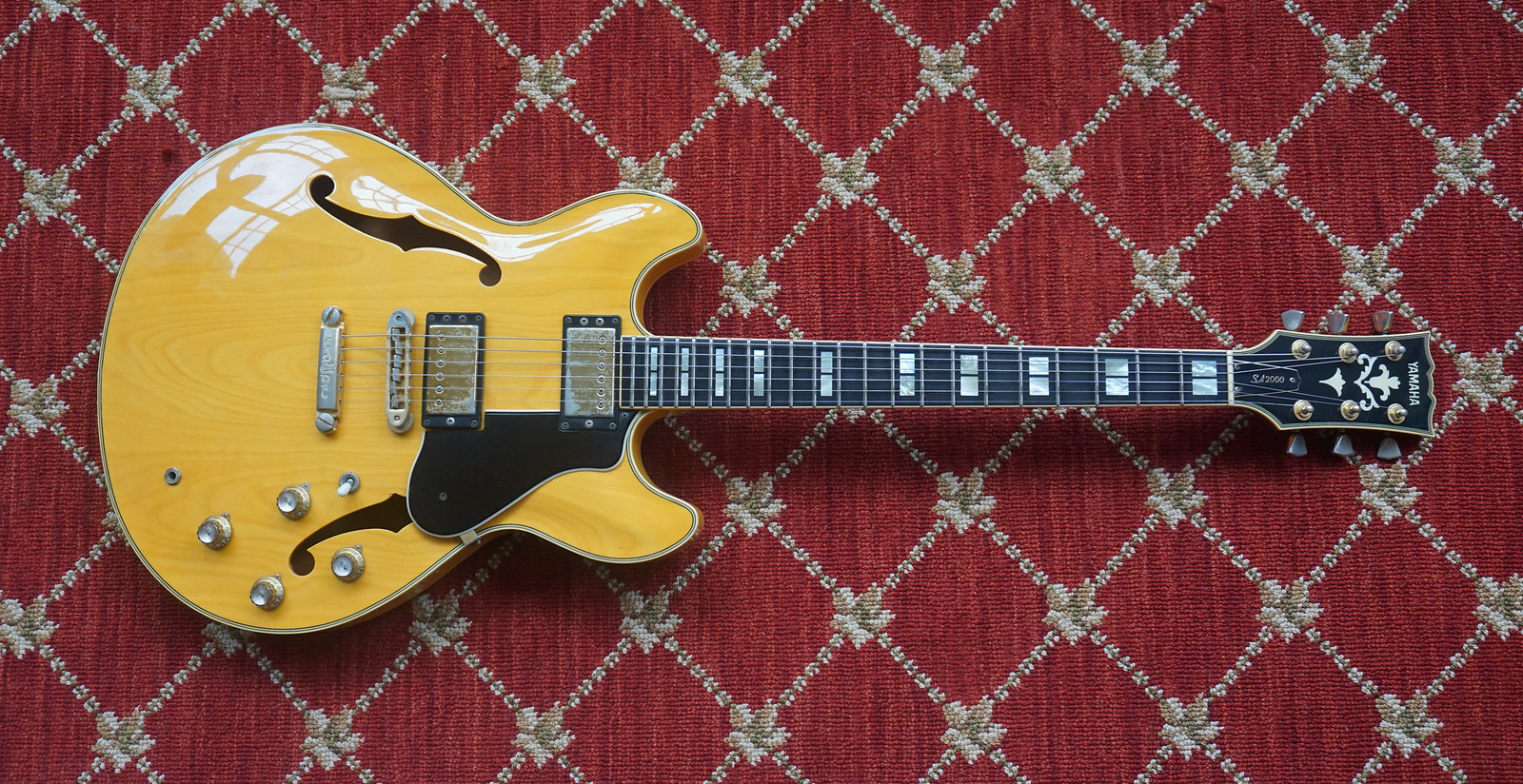 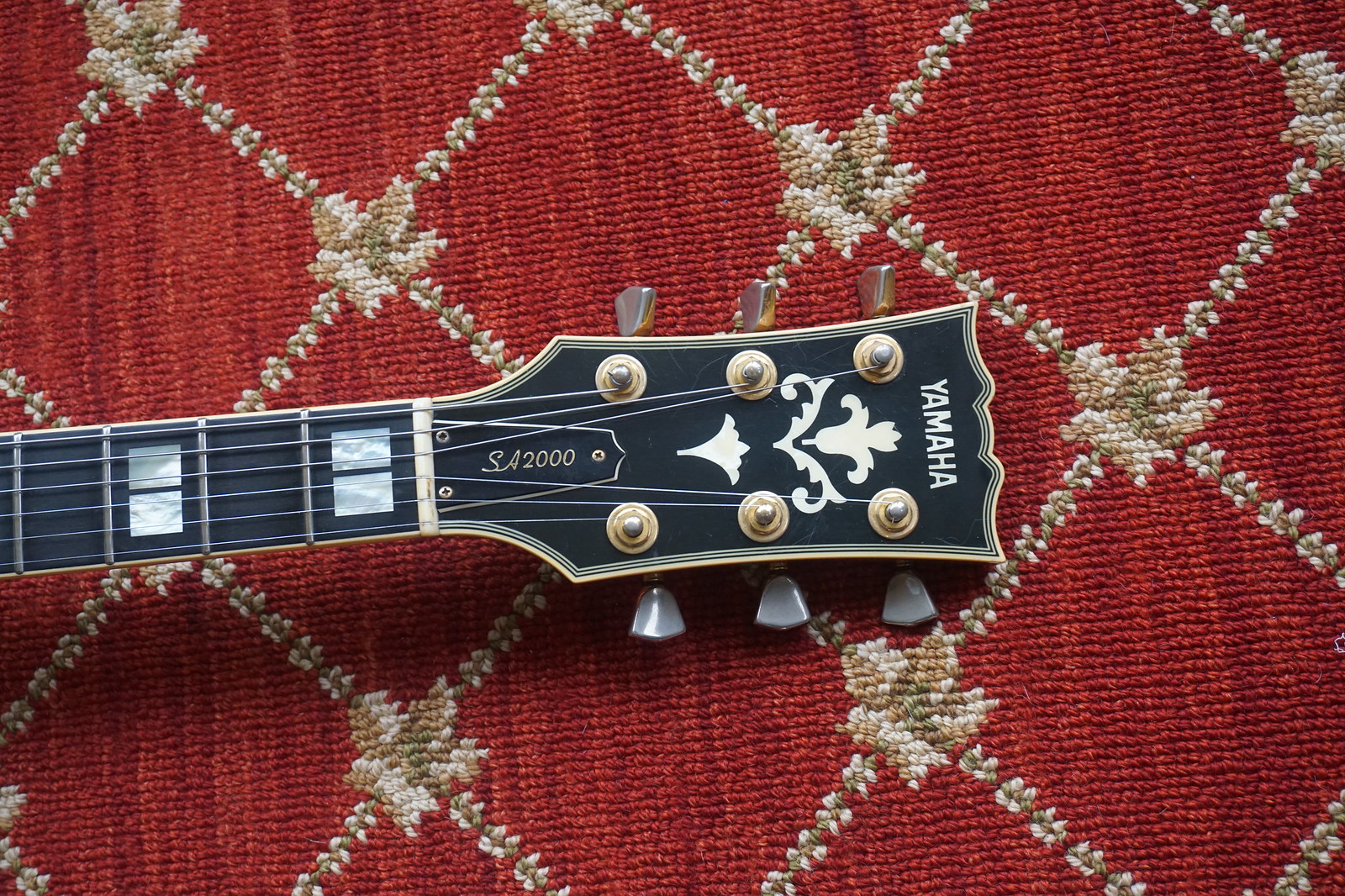 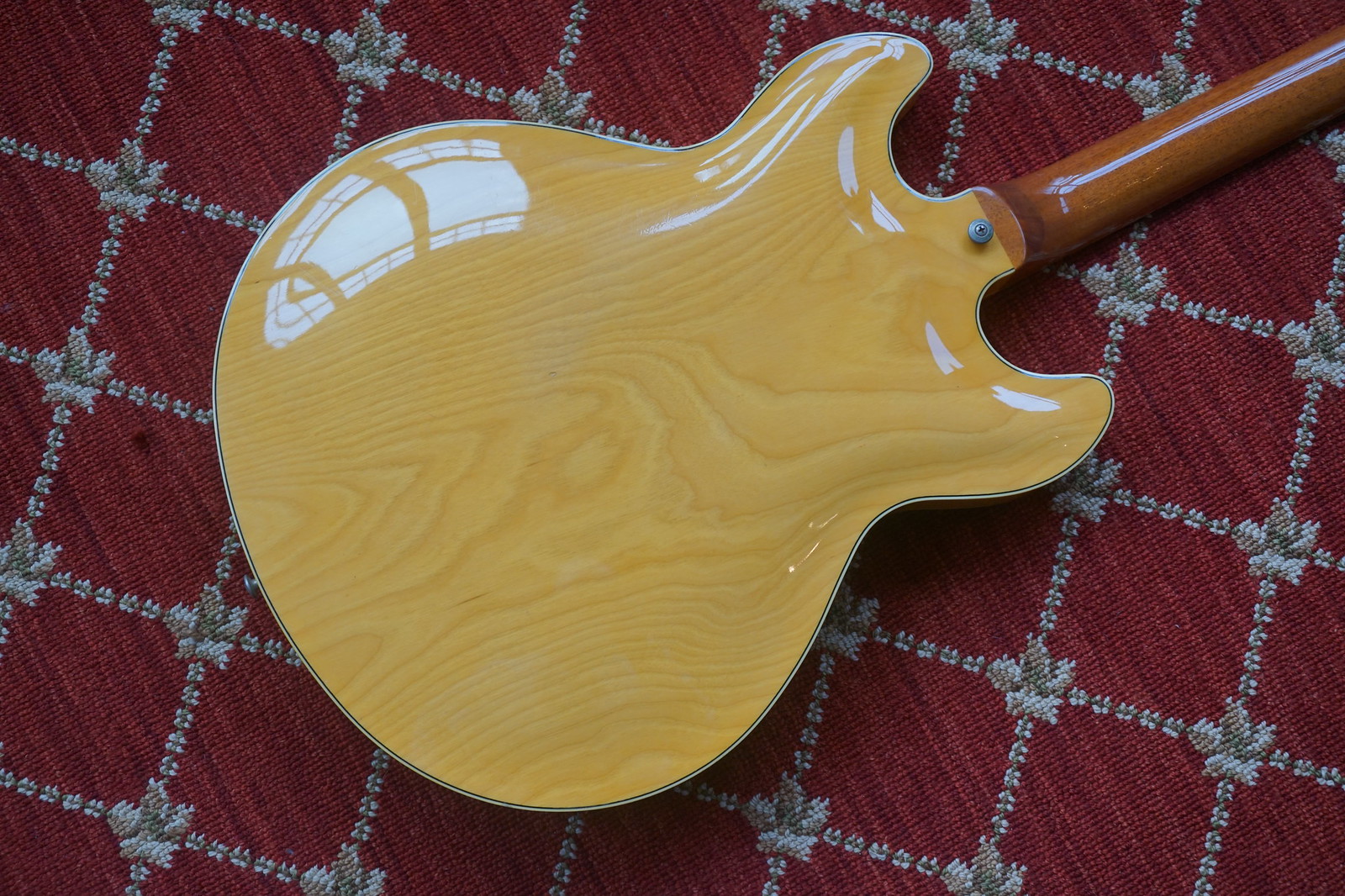 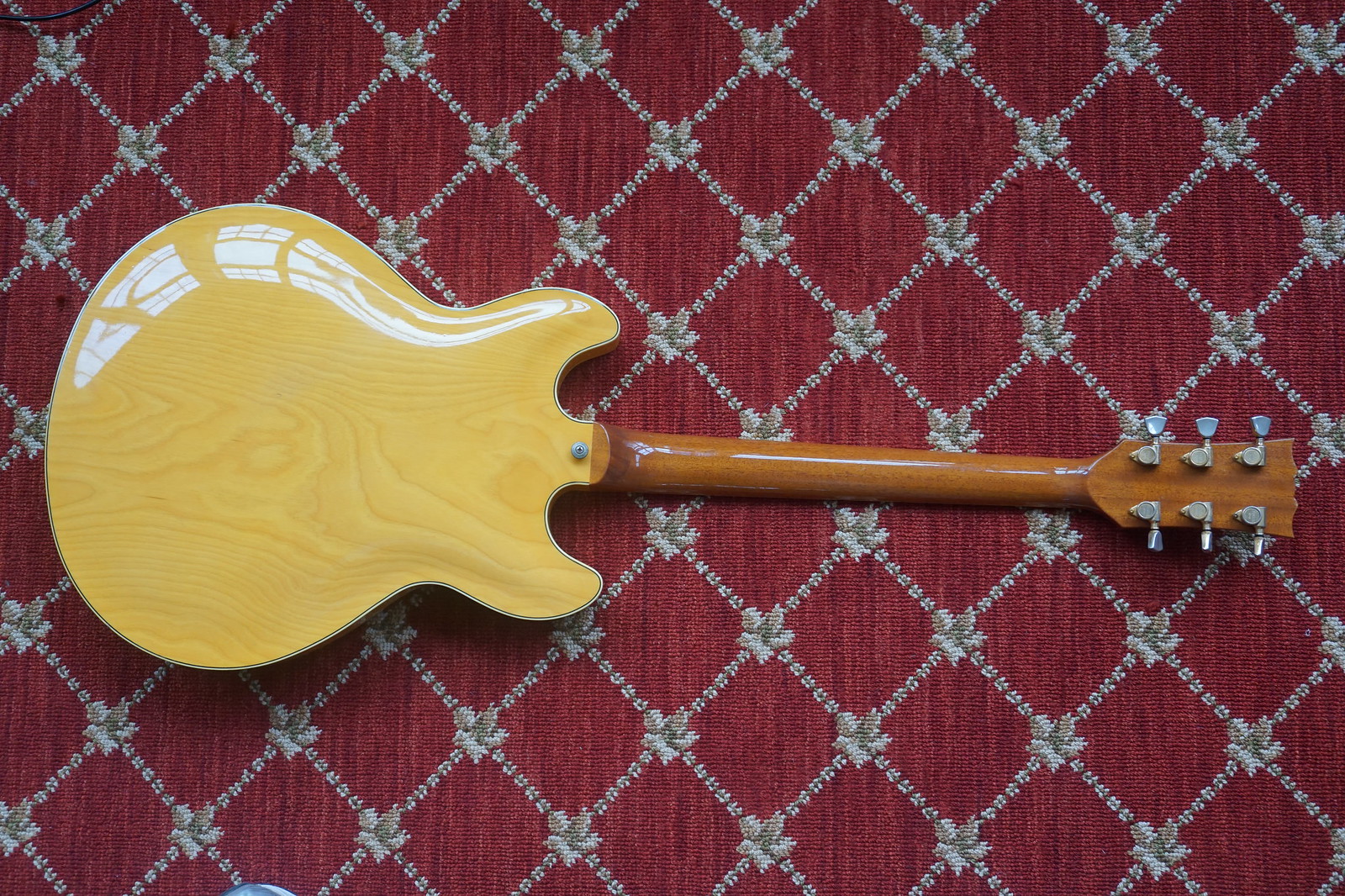 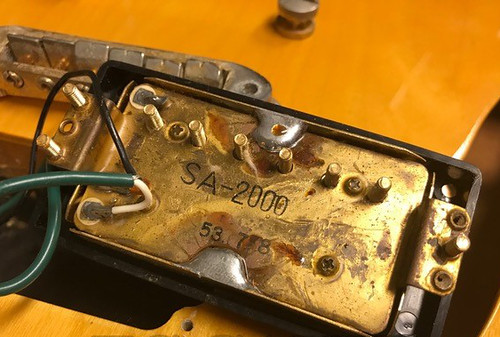 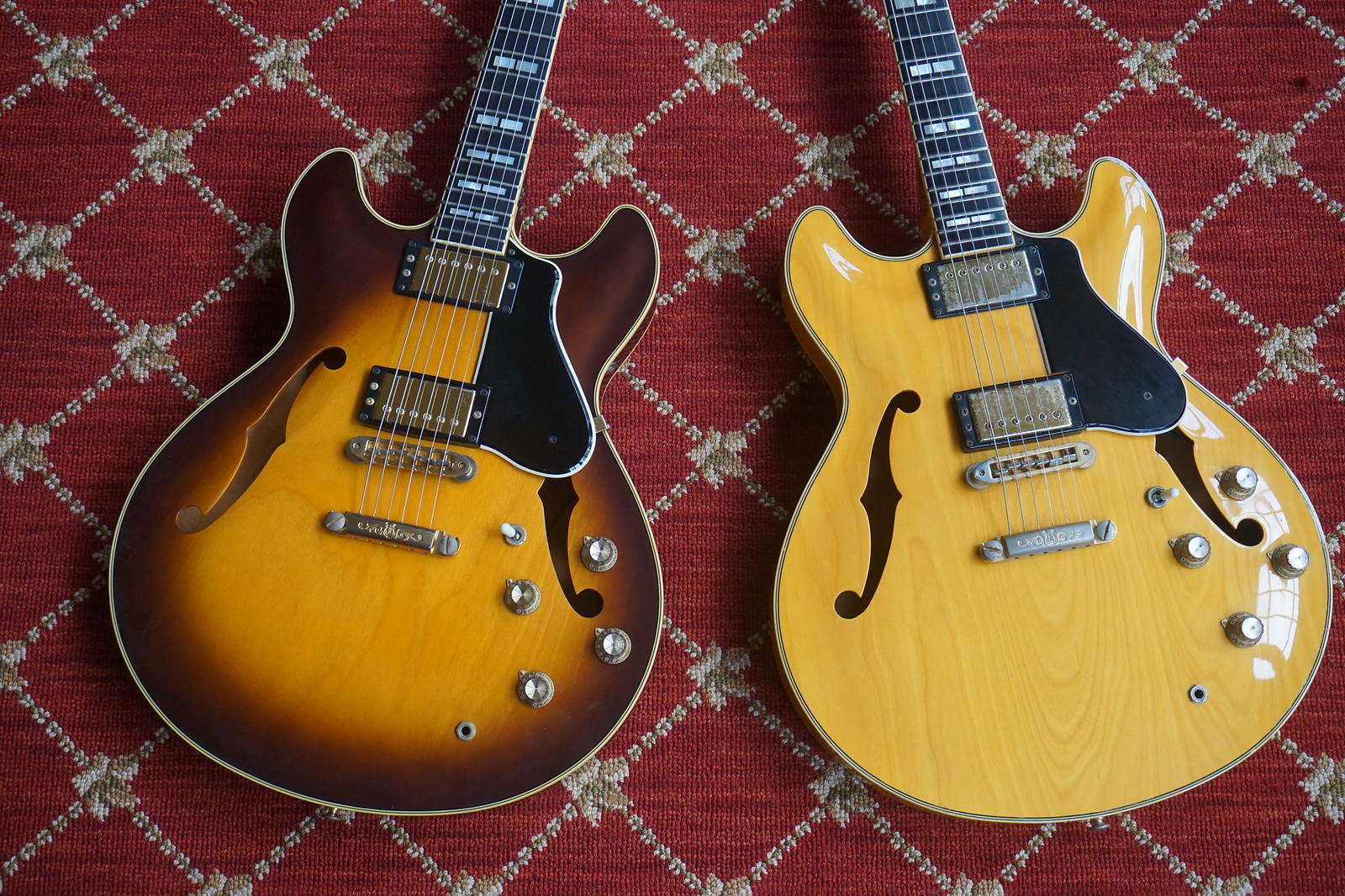 For me the natural enhances the view of curvature of the top that very few gits ever show well.

As for buying a git that's not original, not a biggie for me. Over the years I've accumulated a number of pups in various trades even though I'm NOT a modder. If this one turns out a sonic dud, I doubt it will be for long.

You can definitely find great pickups for it

But to your original question, other than the pickups, an SA 2000 is largely the same guitar as an SA 1000 or SA 1200S, which are excellent guitars, built to the same consistent high quality and have ebony boards just like the 2000. I like the look of both dot neck and the split blocks, great playing guitars either way.

The SA2100 (Taiwan) arrived today, and I have to say, it's top notch. The re-fret is impeccably done, as were the pup changes and the rest (switch and jack) of the electronics.

I'm aware that the MIT SA's are not held in high regard, but having two ES-335's in house to compare it to it is beautifully made. The "F" holes were carefully sanded glass smooth and finished, something Gibson has yet to do. It also balances perfectly on the leg, unlike any Gibson 3xx I own or have owned. I REALLY like this in a git. No diddling with seating position or necessity to wear a strap to correct the typical Gibson body heavy issue.

The neck is analogous to the 335 "slim taper" while I prefer more meat it's immediately familiar in the hands. I have no issue playing it or my 335 with a similar profile.

Pups are tonerider alnico 2 vintage classics and there's no need to change them. Believe me with a seriously decent stock of pups in house I've collected over the years in horse trades... I have pups from makers like Benedetto, Armstrong, Bartolini, DiMarzio, Schaller, Gibson, Duncan and others I'd not be bashful about dumping them if they needed it. The coil split sounds pretty good, the best I've heard. I've been 100% nonplussed about coil splitting, as none I've tried were close enough to a real single coil. The only somewhat usable system I've played or owned is the Ibanez AS series, it can get some decent tones. In the past coil splitting was a useless feature and not something to consider as useful in specs for purchases.

Tomorrow I'll do a setup and inspect it further.

Never knew there were SA2000S with natural finish.

Only colours I come across for the SA2000S are Antique stain and Burgundy red. Natutral doesn't turn up in any catalog, at least the ones I can read so no idea on Japanese home market SA's. But for sure this natural is looking great. Perhaps a one-off?

Also a lot of discussion on the web whether the "S" stand for spruce or for solid. Doesn't matter here becourse all SA's that didn't have a spruce top were laminated beech and birch.

Any thoughts on this are welcome ?

Got curious about the "WHITE BUFFALO" thing and did a little check with my catalogs;

In 1978 both the Japanese and the export catalogs feature a SA2000 in natural finish.

In 1979 the Japanese still does, but the export catalog mentiones only Brown Sunburst and Burgundy Red.

There's one for sale in Japan... original pups included it says.

A very interesting read guys. I can't add a y info, only to say that I own a 'brown' SA1000 that I bought in 1980. A fabulous guitar that I will never sell. A few of the lower frets are showing signs of wear now...but not worryingly so. It has been played and gigged a lot over these past 40 years. It cost £275 which wasn't outrageously expensive even then.
...so I think that it's been a very good investment. It still looks very clean and tidy. I bet you couldn't say that about a 40 year old gigged Fender Stratocaster.